After reading a few articles about the history of Chartreux, you come to the conclusion there is similar basic information that can be found in every source, something that is complementary to each other and something new. The more you are trying to find out about the history of this breed, the more it takes you to the journey through history and you wish to try to get more and more information.

We are continuously trying to complement and modify information about the history of the Chartreux as we learn new information. For all those interested in the history of this breed, we can strongly recommend a book by Jean Simonnet - "Le Chat des Chartreux" - which is available at large foreign webshops and auctions (the book was also translated to the English under the name "The Chartreux Cat").

The history of Chartreux is a interweave between preserved historical sources, talkings and myths passed from generation to generation, which of course can be more or less altered over the years, but there are basically many confirmed facts.

Chartreux is considered as a French national breed and one of its names is also associated with this country - a smiling blue cat from France.

Chartreux are also mentioned by naturalists and artists in their works as early as in the 16th century as one of the first cat breeds. The blue cat is also immortalized on paintings and drawings. In 1756, the French naturalist Georges Louis Leclerc de Buffon mentions in his work Histoire Naturelle, Générale et Particulière, avec la Description du Cabinet du Roi Chartreux as one of the four known breeds of cats (also referred to as Persian cat, Angora and Spanish cat). It is unbelievable that, despite the chaos of time and historical breakthroughs, the present members of this breed and their ancestors are more than alike looking at some of these works. 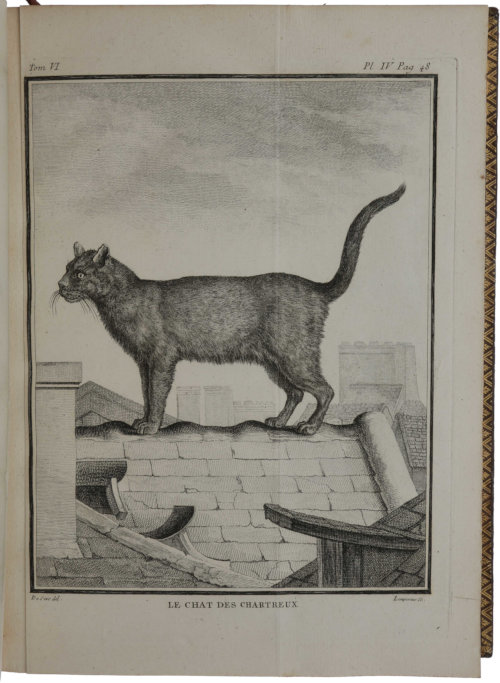 Chartreux probably belongs to one of the oldest natural breeds of cats, but the exact roots of their origin are lost in the past. The cats corresponding to the description of the Chartreux originate historically from the mountainous areas of Syria. Their journey to Europe may have begun with the opening of business trips and in the Middle Ages also the period of the Crusades. Many crusaders were followed by the cats back to their homeland. Together with many former crusaders also the cats found shelter in the monasteries. From here, perhaps, the derivation of the name of the breed from the order of the Carthusian monks may arise. Certainly, in the monasteries, these cats were considered to be capable and brave mouse hunters.

In the past, however, this breed has been valued for something other than for its ability to hunt mice in silent monasteries. The coat of Chartreux has a unique structure in its own way. Its resemblance to sheep's wool, boosted by the additional treatment and desire of buyers for what looks like a desirable luxury, but for many inaccessible Spanish wool, has predetermined some cats for a different fate than being a faithful human companion. Even this may be the source that gave birth to the name of a Chartreux. This luxurious Spanish wool was often referred as the chartreux wool (Pile de Chartreux). 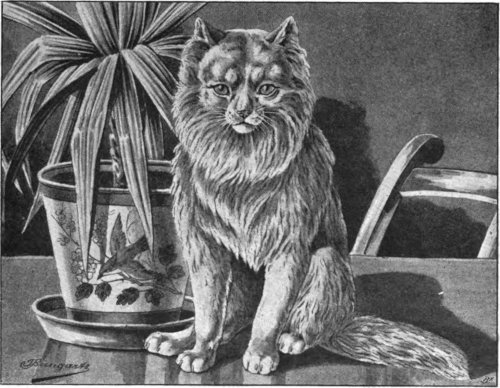 At the beginning of the 1920s, there were areas with wild blue cats in France. One of these areas was the former hospital on the island of Belle Ile sur Mer. The group of cats living there and the breeding activities of sisters Christine and Suzanne Leger in their cattery "de Guerveur" brought the foundation to a modern breed of Chartreux. As a standard of the breed, the descriptions of the 18th-century sources were used. In 1931, sisters first exhibited their Chartreux at an exhibition in France. In 1939 the first official standard of the breed Chartreux was created.

World War II contributed to the general decimation of cat breeds across Europe and caused almost the extinction of this unique breed of cats. Cats died not only in direct connection with the war, but many of them also became a supplement to the diet of hungry and war-dying people. After World War II, no groups of naturally wild blue cats existed. Breeders have sought to return to the pre-war blue cats, whether British cats or Chartreux or European cats. For this reason, cat breeders started to outcrossing to British Shorthair Cats, Russian cats and blue Persian cats. However, cross-breeding of blue cats caused the characteristic signs of the individual breeds to gradually disappear and the differences between them were weaken.

In the United States of America, the first Chartreux were imported in 1971 by the married couple John and Helen Gamon. These cats were offsprings from the direct blood line of cats from the Leger sisters cattery "de Guerveur". Due to these circumstances there was no connection with blue British Shorthair Cats and many bloodlines in the United States of America are often considered as original and one of the purest.

An interesting source of information is also the old catalogs from the national exhibitions. In the antiquarian book stores, we have been able to obtain, for example, a catalog from the cat show held in Havířov in April 1979, catalogs from exhibitions held in Prague in November 1980, March 1983 and January 1988. In the 1979 catalog there is only Chartreux breed (number of the breed or color variety 16), 9 Chartreux were exhibited at the Havířov exhibition in April. In the following year, that is, in November 1980, British Blue Shorthaired Cats (16) were already exhibited at the Prague exhibition in the ratio 12: 1 with the Chartreux (16 F). At the 1983 March exhibition in Prague, the ratio 28:2 of British Blue Shorthaired Cats and Chartreux was achieved.

Despite this unfavorable situation for Chartreux, thanks to the efforts of several breeding stations, the breeding of this breed in our country was reestablished.

The journey through history gave the Chartreux various names - a smiling cat from France, a cat from Malta, an American cat, a hospital cat, but it is important that chartreux breed has survived to the present and we can continue to enjoy its presence.